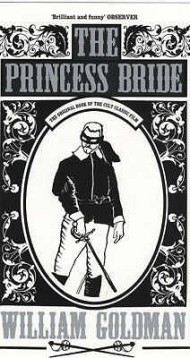 “Has it got any sports in it?”

After reading that quote I don’t think I have to write any more for you fantasy literature lovers! However, the book commences with Goldman discussing the book ‘The Princess Bride’ by Morgenstern, which his father read to him whilst he was suffering with pneumonia (I googled this book contemplating if I should read it first to get a little insight, but it’s all fictional, his life, his family and the book itself!) It was revealed that his father predominantly focused on the ‘good bits’. The “Good Bits Version” became Goldman’s favourite story, which he then continues to recite including parenthetical disruptions for us to appreciate.

This is where it gets good. The story consists of the most exquisite, flaxen-haired maiden named Buttercup who falls in love with her farm boy, Westley. She confesses her love, he retreats to make his fortune and she vows never to love another. Buttercup hears news that Westley’s ship has been seized by the Dread Pirate Roberts (he never leaves captives alive) hence left grief-stricken. However, Buttercup is one of the most beautiful woman in the world; her delicacy captures the attention of the merciless hunter Prince Humperdinck who desires a wife and will go to extraordinary lengths to retrieve what he wants. And thus the animations begins..

The characters are so well illustrated, I genuinely look forward to you meeting them! Goldman is a genius! This book was a wonder to read, extremely witty and clever –had me captivated from the very start! I saw the film straight after which was virtually the screenplay (also written by William Goldman, acquiring an astounding 8.1 IMDB rating). However, there is a sense of suspense and jeopardy in the book that just can’t be conveyed by the film, but I’ll always be book biased.

If you fancy an epic adventure with your imagination, this is definitely the book for you! Highly recommended!